In 1945 I lived in Calcutta, which was where the war was fought from, facing the Japanese front. We were aware that the war had finished in Europe, but it wasn’t yet finished for us. Calcutta was where the Chindits launched their Burma operations from – it was stuffed with soldiers – a huge force from all the nations — Poles, White Russians, Americans, British and, of course the enormous Indian Army; we had 2,000,000 soldiers under arms. Several Air Forces flew sorties against Japan out over the ‘hump of China’. It was also the place where, in 1943 three million starving Indians had come to die – most of them on our pavements. I would pass the bodies on my way to college. Not something easily forgotten. We were all expected to bring enough dry rations to cook and feed families – 700 people every day.

Privately educated, I had taken and passed my Matric at 14, I was now 16, wearing a sari and at College and already thought of myself as a young woman. Both my grandfather and father were journalists, my grandfather having started ‘The Modern Review’ which U Thant, first Secretary-General of the United Nations, years later said “truly represents the voice of freedom”.

Orphans who survived the Bengal famine of 1943. Source.

My grandfather was a reformist Hindu belonging to the Brahmo Samaj, a social reformist movement, opposed to all religious mumbo-jumbo and we were certainly a highly political family – I was one of seven girls, 4 sisters and 3 cousins – all deeply committed to liberation politics and the freedom of women. I myself am proud to have three feminist grand-daughters. For example, we were by no means in love with the war hero Churchill. Now that their correspondence is declassified we learn that our view on Churchill’s stand on the Bengal famine was shared by Wavell, the Viceroy at the time, and also the future Viceroy, Mountbatten.

The event I recall most vividly is the Hiroshima bomb. That day a very good American family friend – Harold Leventhal, author and impressario – called on us and received the scorn and outrage we felt. Harold was left-wing himself but was not given a chance to defend his stand. He beat a hasty retreat, and passing a Royal Air Force officer on the stairs said “hey – don’t go in there – it’s dangerous”. “That’s alright old chap” was the reply, “I’m safe enough – I’m not American”. 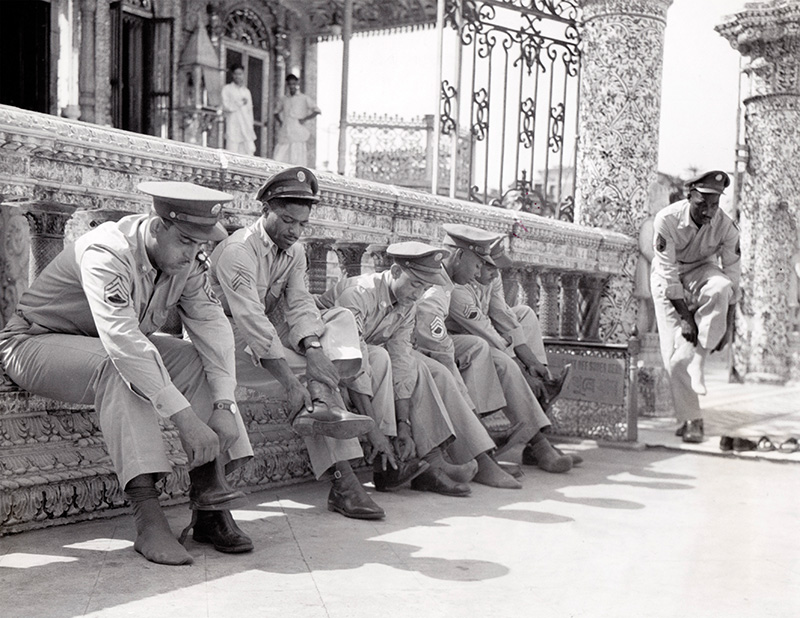 I had so many mixed feelings about the end of the war against Japan. We were all relieved and jubilant of course, but it also meant that the world we knew – uniforms everywhere, planes taking off, good friends of many nations, would completely disappear. No more war, no more noise, but also fewer cosmopolitan friends. Harold left – we saw him off at the station and I remember remarking “Harold Leventhal is going: that means the war is really over”.

On that particular day the streets were filled with trucks full of allied forces and their friends, hooting wildly as they drove around. A small gang of us youngsters piled onto a tram and crossed and re-crossed the Howrah Bridge, whooping and shouting encouragement to all and sundry. The only people not looking happy were the black-marketeers. They had done well out of the extraordinary wealth of goods shipped in to feed American troops.

I recall that my mother was given a 10-pound tin of carrots by a friendly American. We never opened it – in fact after about ten years it suddenly opened itself with a horrid squelching explosive noise. Thus, the war ended, not with a bang, but a splat.

A young Nandita Sen, the author of this story.