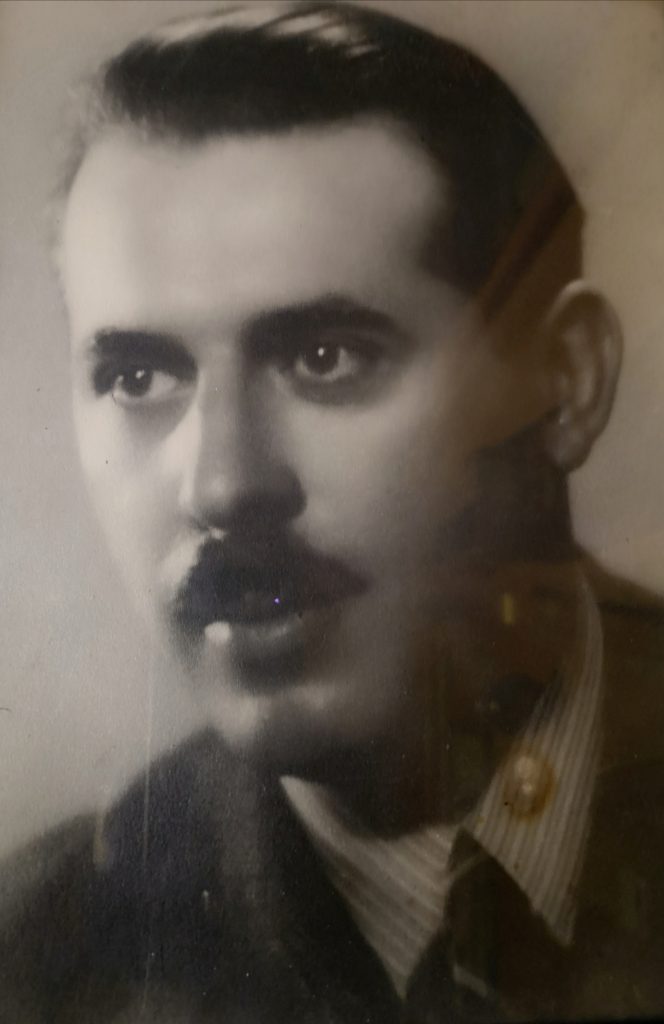 This is the story of my grandfather Georgy Petrov Georundov, as I know it mostly from my father’s memories. A story of a successful milliner, a bright-minded man who lived through probably the most exciting and challenging times of the 20th century. A man with brave, sometimes reckless and adventurous approach to life, life filled with many ups and subsequent downs.

My grandfather Georgy Georundov was born on February 19th 1899 in Sofia, Bulgaria in the family of Petar and Ilinka Georundovy – both refugees from Veles, Macedonia. His father Petar owned a barbershop and like most barbers back then, was a self-taught dentist. His mother Ilinka was a housewife. Georgi had one brother – Vasil, who died at a very young age and a half-sister, from Ilinka’s previous marriage.

Looking for something more in life

Georgy finished primary school in Sofia and started as an apprentice with his father. Being quite a bright young man, always seeking opportunities, he soon realized that he needed to do something different, something better with his life. In the early ’20s of the XX century, Georgi married Anna Boseva – my grandmother. She was from the well known and respected family of Colonel Georgy Bosev – a decorated war veteran. Soon after their marriage, Georgi and Anna went to Hungary in search of a better life, partly because at first Anna’s family were firmly against her marriage with such a “lower class” man. They started working as teachers in The Bulgarian School of Budapest. During their time there they met a local hat manufacturer (unfortunately I have no information on his name, but I will call him D for the purposed of the story). Hats were a very important thing back then, and quality hats were in great demand.

They soon became close friends, and he invited both to live at his house and work in his hat manufactory. It was a new experience for both of my grandparents, so it took a few years before they mastered the art of making hats. During his stay in Hungary, my grandfather also developed an interest in philately, which later became an essential part of his life. Meantime his Hungarian mentor was getting older and was considering options for retirement. Being a Jew himself at the beginning of a world economic crisis and rising anti-Semitism in nearby Germany, he was not confident about the future. (Later my grandfather found out that D lost his life in the Holocaust.) So in the late 20’s he retired and appointed my grandparents in charge with the business. All machines and tools from his factory were dismantled and transported by train to Bulgaria, where the story of “Georg Georundoff’s hats” actually began.

In the Hat Business

While rebuilding the business in Bulgaria, my grandfather took a bank loan to finance the purchase of land and construct a house. This building, still present today, hosted the hat factory on the first floor and was a family home on the levels above. At that time, the family was already growing with first daughter Lilyana, and later in 1932 with my father Ognyan. The family was in the core of the business as everyone, including the cousins, were involved in the production. 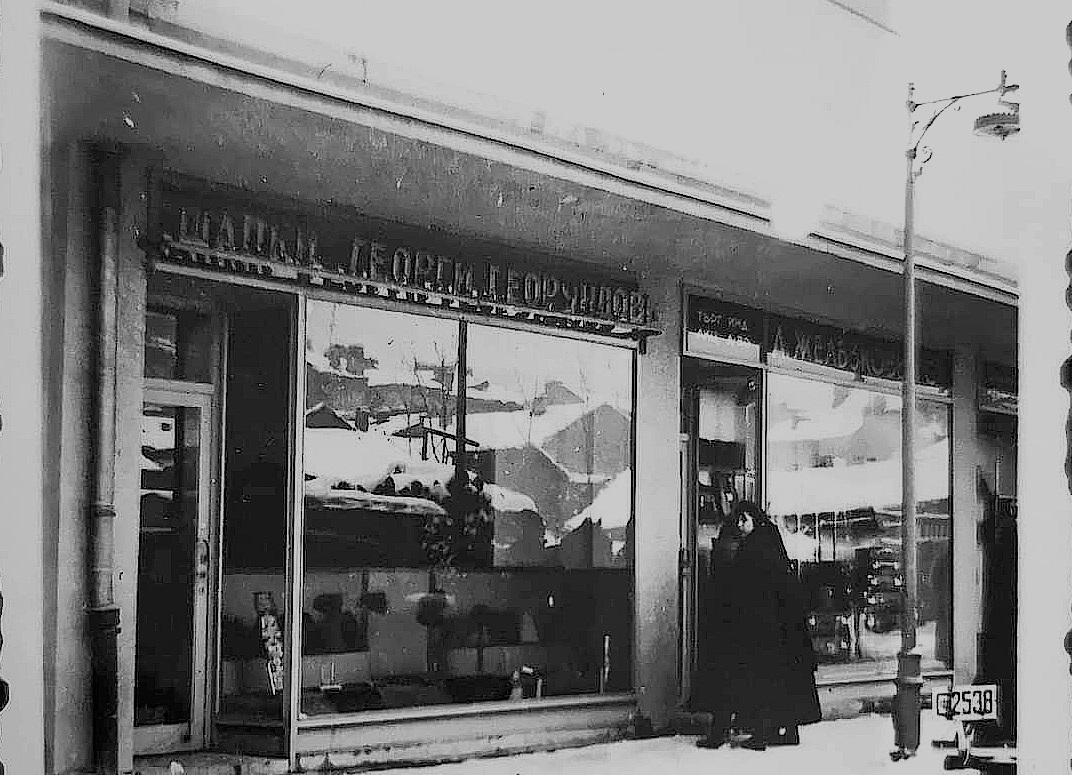 “Georg Georundoff’s hats” was continually evolving, and soon Georgy rented a luxurious showroom in the city centre of the capital Sofia. His adopted aggressive advertisement and managed widely to popularise his brand among the Bulgarian elite. Besides the fashionable Bulgarian ladies, he also found fans within the Bulgarian Royal Court. Not long after he established export of hats for many European countries, offering top quality for a delightfully reasonable price. 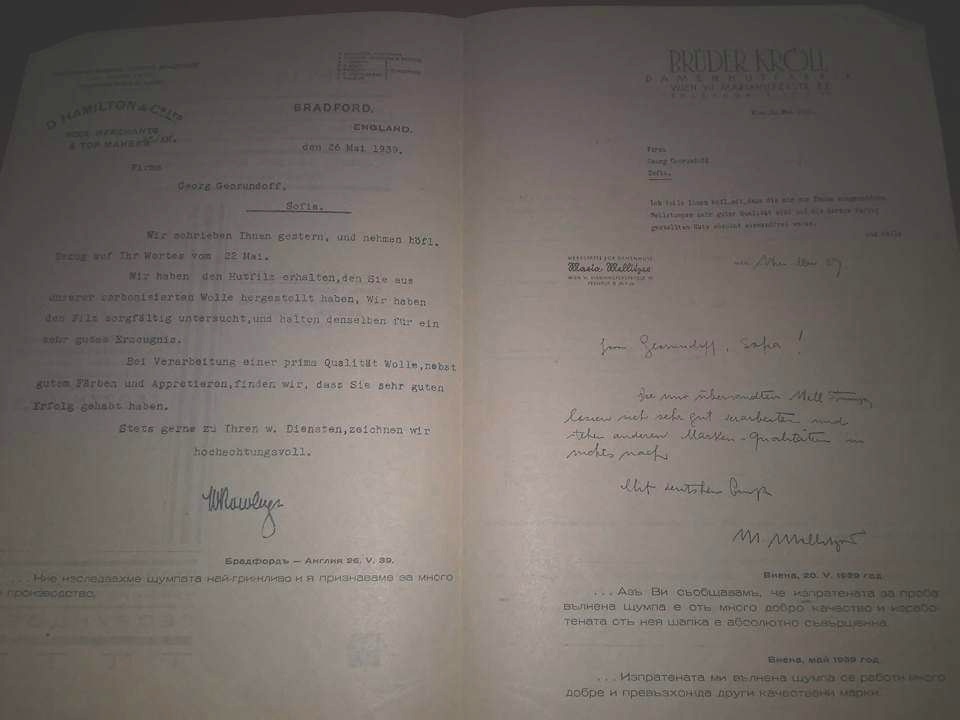 According to my father’s memories, the “secret” of the top-quality hats was the wool – imported exclusively from Scotland and treated with chemicals and dyes imported from Germany. While the demand for his products exponentially grew, he continued to get personally involved in the hat production instead of hiring new people, to guarantee the quality of the output. All his earnings, he invested in property, land, art, his hobby – philately. He was also generous towards the education of his two children (my father started his primary education in German School of Sofia, while his older sister Lilyana was sent to a girls school in Switzerland). He also managed to fulfil his two childhood dreams:

Being a passionate philatelist, my grandfather travelled far from home and took part in a post-stamp exhibition called JIPEX in Johannesburg, South Africa in 1936. An article in “St. Louis Post-Dispatch” published on 11th of October 1936 mentioned: “…Georg Georundoff of Sophia, Bulgaria, a well-known hat manufacturer, is a leading source of supply of Bulgarian issues and packets.”

With the advance of WW2, importing wool from Scotland became impossible, and slowly the hat-making came to a hold. My father saw an opportunity to transform his hobby into a new business. Georgy’s many international contacts created through the years made it possible for him to travel, buy and sell scarce post stamps from all around the world and make a modest living out of it even during wartime. 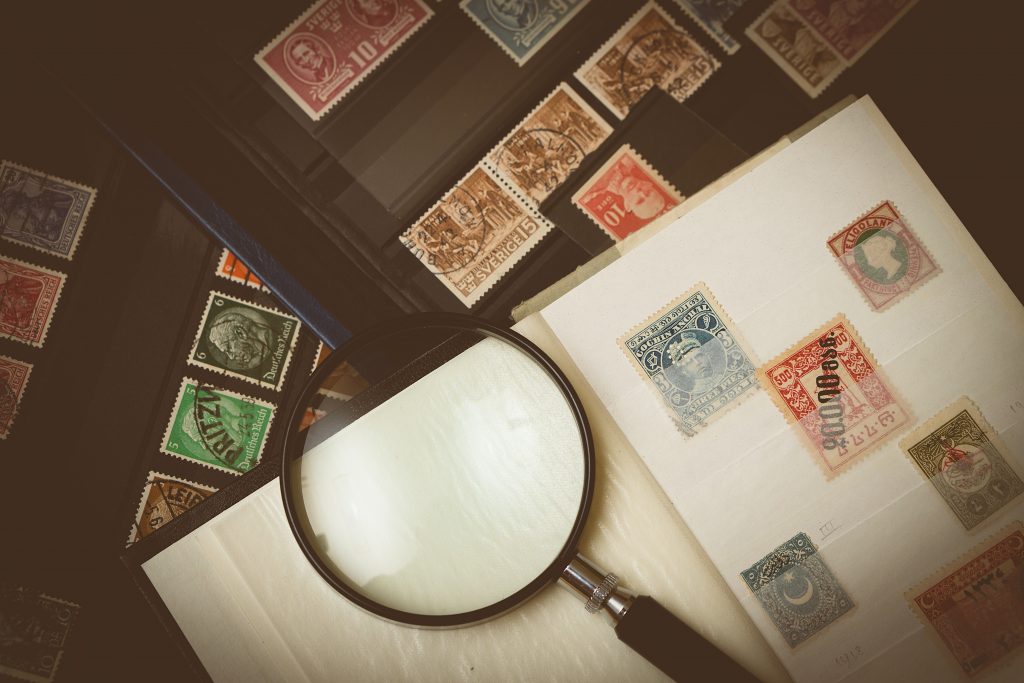 But when the Allied bombings on Sofia started and many buildings were severely damaged with many casualties, my grandfather evacuated the family into the unfinished summer house, located in the skirts of Vitosha Mountain near the capital. There they’ve spent the rest of the war with no running water and electricity. During that time he also volunteered in Civil Protection. This same house is the one I am living in today.

With the Soviet occupation in Bulgaria, the new Communist regime and then end of the war, life for Georgy and his family started slowly to return back to normal. Or at least they hoped so. Soon my grandfather was declared “enemy of the State” and “Fabrikant” (factory owner). Gradually all of his properties and pretty much all of his belongings were nationalized/seized by the regime. His wife Anna struggled to deal with such reality and filed for divorce. Later she took their daughter and moved to live with her brother – a well-respected architect. My grandfather was left to inhabit an attic above his former hat factory for many years, sharing one room with his son – my father, until some years later he managed to reunite with my grandmother. Being an enemy of the State, he was not allowed to work; neither was entitled to a pension. In his survival, he depended on friends and occasionally selling the leftovers of his philatelic collections and artworks. Many other people like him were deprived of their property and belonging, left without essential means of survival, evicted into the rural parts of the country or send straight to the labour camps.

My grandfather survived probably because his international connections had some value for the Committee of State Security. Even after the change of the regime, he was still in contact through letters and phone calls with many friends and associates, mainly in West and East Germany, Hungary and Yugoslavia. The authorities needed him around to trace all his activities easily. However, he was arrested and badly beaten a couple of times, probably just as a reminder that he’s being closely watched.

After the Communist regime fall

After the fall of the Communist regime in Bulgaria, free access to the records of Committee of State Security was finally granted. My father managed to read Georgy’s file. It turned out his phone was tapped, he was tailed, all his letters, incoming or outgoing, were opened, read and copied in his dossier, including info about the other sender/recipient.

In the late 70s Georgy and his ex-wife Anna somehow melted the ice between them and soon after they reunited. I guess there were still some feelings left after all. My grandfather was taking care of her during the last months of her life.

Georgy Georundov passed away 22nd of July 1988, about ten months after I was born. I never managed to meet him in person. But my father used to say that despite the tough and challenging life Georgy had, he never lost his high spirit and spicy sense of humour. And no matter the troubles and sudden twists of fate, he always managed to enjoy life and get the most out of it. Knowing him only from pictures and the stories my father told me I honestly regret that I never had the chance to hear his version in person. Well, at least I hope he was happy to welcome his grandchild (me) named after him.