The Raid on the Cinema

Surviving the first day of the London Blitz 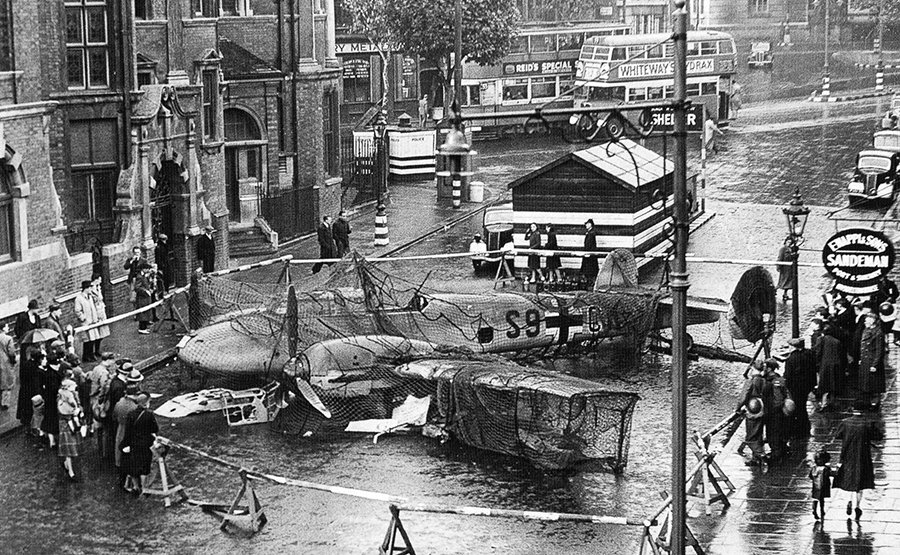 A fateful day at the cinema

My parents had the knack of always getting the big decisions wrong. For example, on the first day of the Blitz, of all days, my mother and father decided to take me to the cinema. It was the first time in my life I had seen a film. My father tried to explain what a film was, but it made no sense. I had no idea what would happen in the cinema. We went to a cinema in Woolwich (I think it was the Odeon), a bad choice, for it lay just up the road from Woolwich Ferry, opposite the Royal Docks and close to the main gate of Woolwich Arsenal. Since the purpose of the raid was to wipe out the City of London and the dockland industrial belt along the river, we were caught right in the middle.

It was the early evening performance so we must have got there at about four o’clock. We did not know it, but the largest bomber force the world had ever seen was coming up behind us. The Germans sent over 150 bombers with twice as many fighters acting as cover. When the bombers finished dropping their load, they were replaced by another wave of bombers, so the raid went on a long time. The sky over London must have been thick with enemy planes. This raid is usually illustrated in the history books with a photograph taken from a Messerschmidt fighter over East London. It shows a Heinkel underneath, with the Thames and streets laid out below. On the right-hand edge of the picture is the roof of the cinema we were in. That must have been taken about ten minutes after we arrived, for the film had just started when a caption appeared on the screen to warn the audience that the sirens had sounded. A few people got up and walked out, but most stayed put. We had paid some 9d (3p) for our seats and did not want to throw good money away. The noise of the air-raid soon drowned out the film. We could hear bombs exploding nearby and the rattle of anti-aircraft fire, but most worrying were the bells and sirens on the fire-engines and ambulances that roared past on the main road outside. More and more people walked out. I guess the cinema ended up about half full.

Heinkel He 111 over London. Source.

The bombs came through the roof

But I was far more worried about the film than the air-raid. By this time air-raids were old hat: a film was something completely new. I was too young to understand the difference between reality and make-believe. To me what was happening on the screen was real- after all, I could see it with my own two eyes, so it had to be happening. It was an early Technicolor film called ‘The Blue Bird’, a Hollywood version of a German fairy-story. I can still recall one scene quite vividly of a small boy and girl (Shirley Temple and Johnny Russell actually), dressed like Hansel and Gretel, running through a burning forest. Trees were crashing in flames behind them. This really frightened me. I was certain they were going to get killed. But what actually happened to them I shall never know, because at that moment a stick of incendiary bombs came through the roof.

We were lucky. I believe people were killed on the balcony above us and also in the main auditorium, but we, seated right at the back, were untouched. I can remember a lot of vivid white smoke and there was a peculiar smell, which was probably the burning magnesium in the bombs. Then there was total pandemonium. People were screaming, clambering over dead bodies and rushing for the doors. There were people on fire, like burning torches, and people screaming on the floor as they were burnt to death. 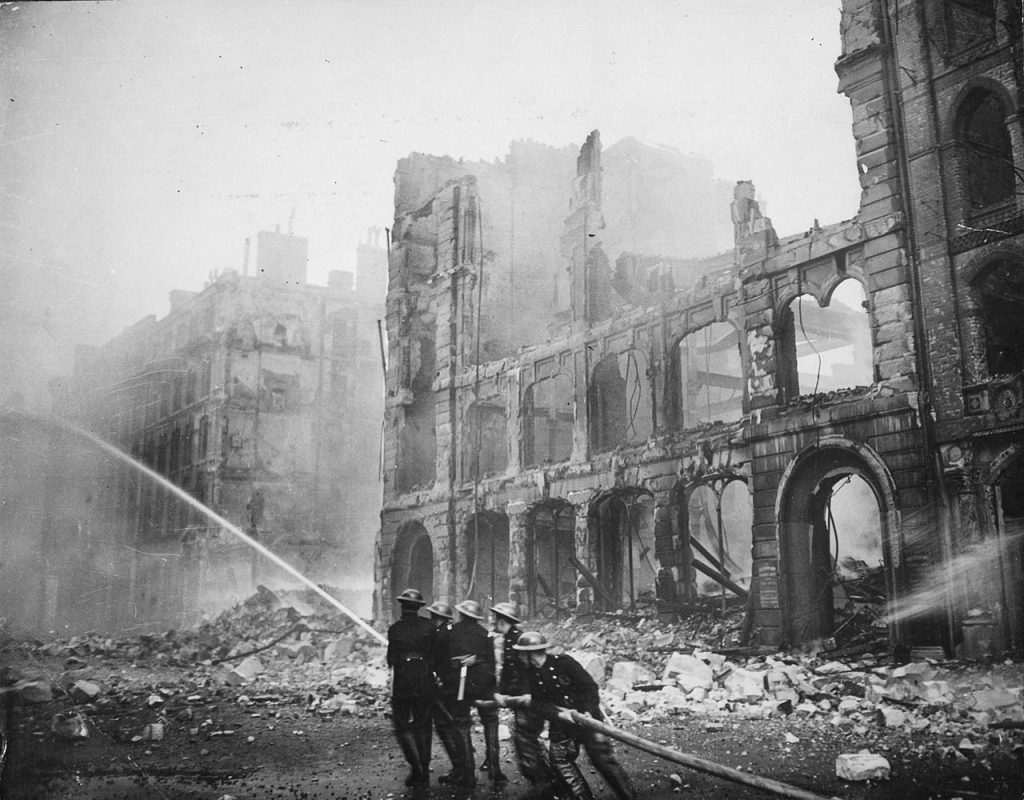 The thing I most admired about my father was that he was completely unflappable. Not once did I see him lose control. Consequently he was a good person to have around when there was a real emergency, because when everyone else was panicking, he would remain calm and apply common sense to the situation. And that is what happened on this occasion. My mother and I just wanted to rush out like everyone else, but my father held us down in our seats and said, “No, don’t move. It’s suicidal.”

So we were forced to remain there and watch the chaos around us for what seemed a long time, though it was probably only a minute or two. Then, when things had quietened down somewhat, my father said, “Alright. Let’s go,” and we walked out into the foyer.

It was in darkness, but one could see what was going on from the light of the searchlights and fires outside. There were wounded people lying on the floor and couples crying. There were also three men blocking the doorway stopping people getting into the street. I cannot remember whether they were police or air-raid wardens, but they had tin hats on and dark uniforms. So we stood there, like everyone else, uncertain what to do, again for what seemed a long time, until a HE bomb landed on the shops on the other side of the street. There was a deafening bang and a tremendous ‘whoosh’ as broken glass was flung across the room. The blast knocked the three police flat on their faces: I do not know whether they were killed or simply knocked out. My father shouted, “Jump,” and we jumped over them and ran down the road to a surface shelter. It stood in the middle of the street by Woolwich ferry.

Aldwych tube station being used as a bomb shelter in 1940. Source.

It was, of course, crowded, but somehow we managed to squeeze in and were stuck there for some six hours or more. It was impossible to talk because there was so much noise going on outside, and every time a bomb exploded nearby the whole building rocked.. I remember an air-raid warden coming in with a bucket of cold water and an enamel mug. He asked whether anyone would like a drink. I said, “Yes, yes please,” but my mother said, “Of course you don’t want a drink. Don’t be silly,” and I never got my drink. I think she was worried that if I had a drink I would next be demanding to go to the toilet. 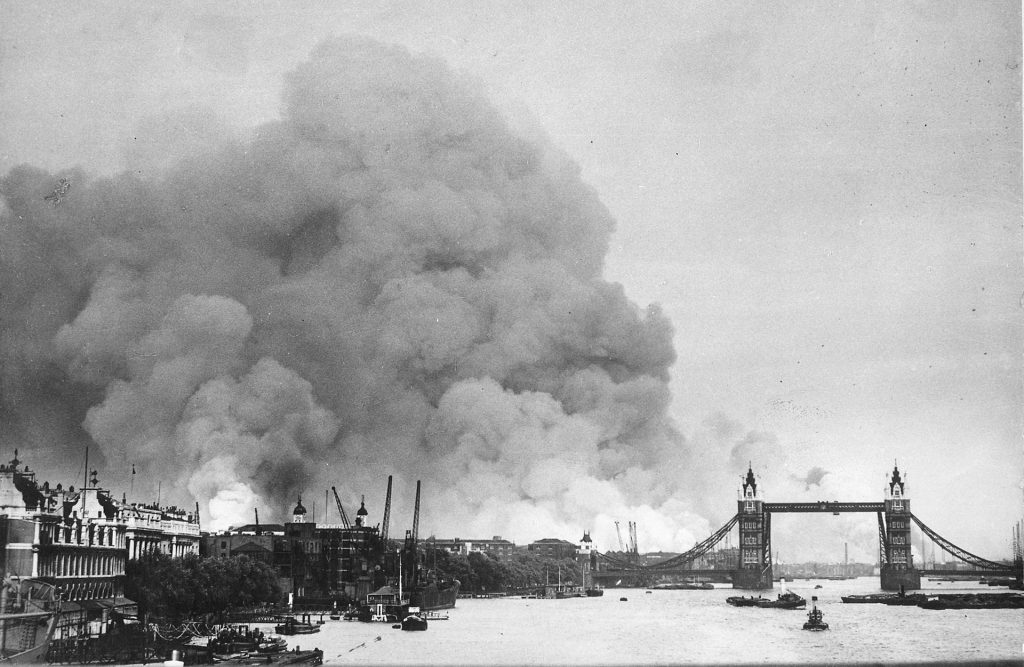 Smoke rising from fires in the London docks, September 1940. Source.

The all-clear went at about eleven. We went outside and stood on the riverbank. It was an unforgettable sight and so bright it was almost daylight. On the other side of the river, a little higher up the Thames, a warehouse was ablaze. As we watched its wall slumped down into the water. There were barges drifting down the Thames on fire, and away to our left we could see a huge orange glow in the sky. We didn’t know it, but it was the buildings around St. Paul’s going up in flames. There was also a nauseating sickly sweet smell that I have since been told was probably burning sugar in the warehouses.

Then we walked up toward the main crossroads. I saw a boot in the road with something sticking out of it and paused to look. My mother dragged me away saying, “It’s only an old shoe.” But it wasn’t: it was a brand-new shiny boot with part of someone’s leg in it. At Beresford Square a tram appeared miraculously. We jumped aboard. I can remember the sound of the metal wheels grinding the broken glass in the street as we went along, But then my memory goes a complete blank: I think I must have fallen asleep.

My father told me, years later, that we only covered about 200 yards on the tram, because the street was blocked by firemen’s hoses. We had to walk some five miles home and didn’t arrive till just after dawn the following day. No doubt my parents thought the house would be just a pile of rubble. In fact it was completely untouched. I do have a vague memory of me staggering about in the middle of the street like a drunkard and my father telling me to walk properly. I was whining that I was too tired. I just wanted to lie down in the road and go to sleep. He must have carried me most of the way. 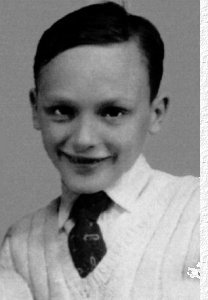 Young John Matthews, The Author of this article