I Cannot Understand How We Survived

Stories from Japan during the years of hunger

Japanese children waiting in line for a meal. Source.

Our life after the war

My name is Yoshitaka Kawazoe, but I’m often just called Yoshi. I’ve lived in Osaka, Japan all my life, but I’ve travelled abroad a lot on business.

I can certainly recall the painful years at the end of World War Two. My parents kept a small liquor shop – selling sake and things such as salt and soy sauce, but everything disappeared and there was nothing to sell; so we went hungry. I was often sent out with other children to pick edible wild flowers and weeds that grew beside the railway tracks and my mother would make a thick soup with those. Rice – our staple food – was in very short supply. We would be given a dish that was 95% water, and I would scoop up the salty water and save the few grains of rice for a treat at the end. Even potatoes and other vegetables were hard to get, and we were so poor me and my brother and two sisters were always hungry. How we survived even now I cannot understand.

Two incidents I recall. One day I returned from school and on entering our small house found my parents and sisters covered in white powder, and two American soldiers pumping this powder into every corner – it was DDT of course. Quickly one of the soldiers grabbed me and pumped this stuff down my clothes front and back and on my head. This was because the American occupation forces found that disease due to malnutrition was having a severe effect on the civilian population so they decided to fumigate; cheaper than food I suppose.

But this treatment had a good side to it because afterwards the other soldier gave me and my sisters a white bread roll each. You may think this was no ‘big deal’ but for us it was a first taste of a heavenly food we had heard about but never eaten. Yes I can taste that bread even as I think of it. I should add that the occupation forces also supplied condensed or skimmed milk to families with children, and I think this is how we kept alive. 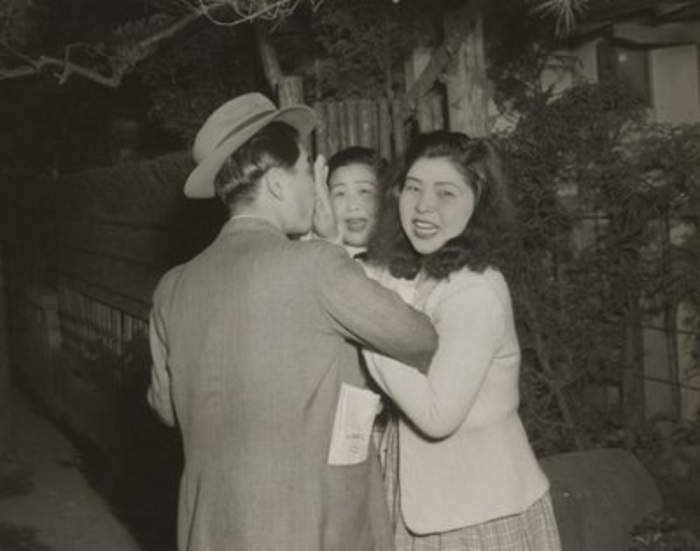 Another time I remember getting into a railway carriage and opposite me was an American soldier, in uniform, and he was hugging and necking with a young girl who I could see by her sexy bright clothes was a ‘Panpan’ – these were prostitutes that were reserved for American soldiers-and they were behaving shamelessly in public in a way that was such a shock to me, an ordinary boy of 13 years, and indeed was shocking to all those in the carriage that could see. I suppose times have changed, but even now in the twenty-first century I don’t see young Japanese behave in this way.

Young Yoshitaka Kawazoe, The Author of this article