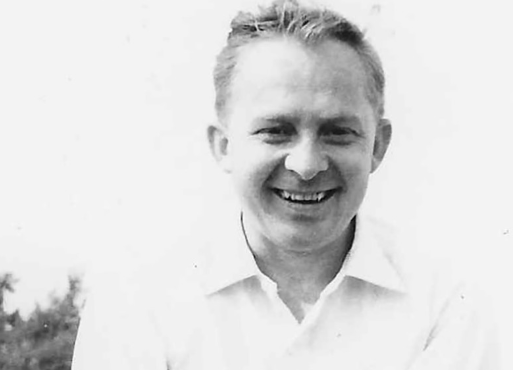 The number 1088 was amateurishly tattooed on my grandfather’s strong, freckled arm.

I saw it when he tucked me in at night, held me when I was sad or when he was tinkering with the circuit boards inside the TV.

I have no siblings, my father lived overseas and my mother worked long hours as a nurse. I was his only grandchild. We were incredibly close.

He was joyful, compassionate and gentle. There was something serene to the point of steely about him. He approached life with the kind of resilience that that you rarely see in someone who hasn’t suffered. He was Polish, with a wonderfully thick accent coating all his English words. In his 70s, his thick, white mop of hair, once flame-red, fell gently across his forehead.

We’d spend our time doing my homework and painting Japanese watercolors. He created landscapes with a few gentle lines. Mine looked like an ink blot test.

He’d laugh and encourage me. He’d teach me world history, martial arts, politics, languages … I can trace back each of my passions to conversations we had in his little study, crowded with books.

One day we were talking about how I didn’t want to be confirmed as a Catholic like my grandmother wanted. Kneeling, with great discomfort, to be on my level, he reached over to the bookcase and pulled a stack of books on Buddhism, Taoism, Hinduism and Islam. “Here,” he said, “maybe you will like one of these.” He could teach a life lesson in one sentence.

Zenon Jakob Stanislaw Stolowski was 18 and training to be a Catholic priest in Poland. He was born to a poor family in Poznan. His father died when he was young. He had a sister who died in 2017 and one brother, Jan, who was shot fighting for the Polish resistance.

The Nazis had invaded Poland the year before and Zenon’s seminary was printing anti-Nazi pamphlets encouraging resistance. The SS discovered them and as part of their brutal suppression of the Catholic Church, he was arrested as a Polish political prisoner.

In June 1940 he was transferred to Auschwitz — the site of the biggest mass murder in human history. He was no longer a human being. He was the number inked into his left arm.

Sirens blasted every morning at 4.30 a.m. Once, one of the prisoners went missing. The guards ordered them to stand outside for days without food or water until they discovered the details of the escape. My grandfather said if they fainted, or began to sway, they were beaten or taken away. Six months earlier, he was studying the Bible and preparing to devote himself to God.

I overheard him talk about the gray wall. Prisoners had to run to the end of courtyard and if any of them failed to make it to the other side — weakened by forced labor, torture and malnutrition — they were deemed useless and shot on the spot.

Only if asked, would he speak about the gas chambers. Hearing the screams of prisoners who had been told to strip for showers suddenly realizing they were about to die.

One of his jobs was to move the dead bodies. That’s how he’d hear the screams. The smell of corpses lingered in his nostrils.

Recounting the horrors was something he did with extreme reluctance — as he never wanted to distress people. The stories I’ve written here are the few he told us directly or that he documented for the British government. He listed the timeline with wrenching formality for the Home Office:

Four years imprisoned in Auschwitz. Reduced to a one-line space.

In his own almost-fluent English words, Zenon wrote, “during my imprisonment in Auschwitz there was a constant supply of prisoners from the Main Camp to do a force labour in nearby Synthetic Rubber Factory known as BUNA. It was run by SS men in conjunction with German civilian. After about 6 to 9 months the prisoners were replaced by the new arrival because there were no longer capable due to undernourishment, beating and exhaustion to perform to the required standard. I was forced to work in this factory during late 1943 for over 6 months. When I was become useless I was sent back to main Camp.”

He was “wounded in legs” because the prisoners transport train was bombed. He was one of the only survivors because he’d contorted his withered frame into a storage shelf in the corner because the train was packed so tightly with people. He had shrapnel in the back of his knee for the rest of his life. It hurt him when he walked.

In April 1945 my grandfather and several others escaped the camp when the security started to break down. I don’t think “malnourished” or “fatigued” would be the right way to describe their state after four years of concentration camp. I’m not sure what is.

They reached a barn on the outskirts of the camp and hid. At some point the barn door cracked open and my grandpa told how they saw the silhouette of a soldier with a gun slung over his arm. A German soldier. He thought “I’ve lived through four years of this, we escaped. Now this is the moment I die.” The light shifted and they saw the soldier was wearing a US uniform and that he was in tears — shocked from the horrors of the camp the Allies had liberated. They were free.

Many years later, after he had died, we found a detailed account of liberation written on the back of his calculus work from 1950. Memories returned to him in flashes.

That’s all I have. Only hints of the horrors he endured. He swallowed his own pain with a stoic fortitude because he was desperate to ensure the anger and hatred would not be passed onto the next generation — knowing what it could lead to. The only stories he’d tell me about Auschwitz were about kindness.

The kindness of the American soldiers who saved them. With the best intentions the troops gave their own food to feed my grandfather. Condensed milk. Meats. The fact that rich food on a starving stomach gave him dysentery, leading him to be mistaken for dead and placed on a pile of bodies before he stirred and was once again rescued and rehydrated … was an afterthought to my grandfather. The Americans gave up their food for starving strangers. To him, that was the takeaway.

He’d tell me how when he was made to work the fields on the perimeter of Auschwitz to feed the camp the locals would risk sneaking out in the middle of night to hide cooked potatoes for the emaciated prisoners. He was discovered once when the guards searched him and potatoes tumbled from his hat. He was sure he would be shot. The guard kicked him into the muddy field and walked off. He had no idea why he wasn’t shot on the spot.

He once told me about a very young Nazi soldier who slipped him one glass of milk a day — risking his own life. He said he could tell he didn’t want to be part of running the camp. That might have kept my grandfather alive.

A new life in England

We don’t know much about how my Grandpa got to England. He spent two years in Italy after the war ended and was granted refugee status in London. The British government gave him a UK passport. He spoke no English and only knew two English sounding names — Harry Truman and George Burns. He combined them and became Harry Byrnes, with a new birthday — January 1. A new beginning. 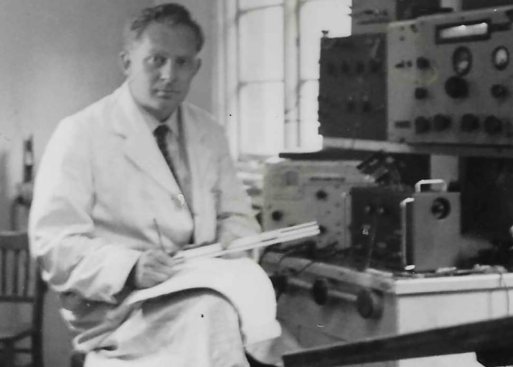 Harry matriculated in one year and studied engineering and maths at university night school while he worked as projectionist in a London cinema. My grandmother was working as an usherette in the same theater. They fell in love and married in 1955. He went without lunch for two years to pay for her engagement ring. I suppose for him that wasn’t hard.

They had one child — my mother. When she was born my grandfather was still suffering from appalling night terrors. The doctor recommended the family move to a warmer climate to help my mother’s asthma. Every last penny they had went on tickets to sail to New Zealand. Settled, safe, with the promise of work as an engineer in Auckland — my grandfather slept … for six weeks. He woke only for food and water. When he finally came to, the night terrors lessened. Twenty years after liberation.

Then he lived. He doted on his family, kayaked, explored, earned a certification in coastal navigation, rode motorbikes, swam out into the sea so far he lost sight of land. He learned languages, studied astronomy and built his own Polish sausage-making shed.

Everyone who met him spoke about the care and compassion he showed friends and complete strangers. He would let people who had fallen on hard times, or new immigrants stay in his house for as long as they needed — despite only having two bedrooms. He’d pick up hitchhikers and befriended the outcast Hells Angels in Auckland — the hairy, leather-clad bikers whom locals thought were bad news. He liked to bring friends and family to support a local restaurant run by transgender women.

The former Catholic-priest-in-training was truly race, religion and life-choice blind.

A man who loved fiercely and forgave completely

In the hospital on the day he died … my grandfather told a story of being transferred from the labour camp to Auschwitz on a train. When they were let out, he fell onto the train tracks. He had nothing left. He saw a train coming and knew, again, he was going to die. Suddenly he was grabbed and pulled out of the tracks onto the platform. He looked up at his rescuer and saw a Nazi guard. The guard left him on the station floor and ran off.

There are two ways to interpret that. Either the guard thought a dead body in the tracks would be inconvenient — holding up the trains, or something he might be blamed for. Or it was a moment of compassion between two men who didn’t want to be where they were. I know which interpretation my grandfather wanted me to see.

How could a man who knew more torment and suffering by the age of 20 than I could begin to fathom in the darkest moments of my life, be a source of only happy memories? No one made me feel more loved, safe and indulged the specious struggles of my childhood with more concern and empathy.

He experienced the pit of human evil and had every reason to be bitter and righteously angry for the rest of his life. But he didn’t. He loved fiercely, forgave completely. Now when I look back I can see why — it’s because he survived five years in concentration camps and was determined not to remain a prisoner 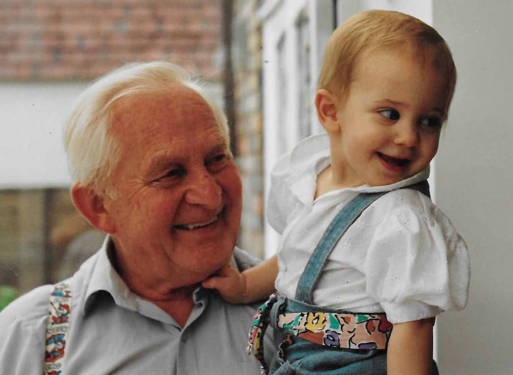