A Polish born Zigmund managed to escape the Nazis, not just once but multiple times. 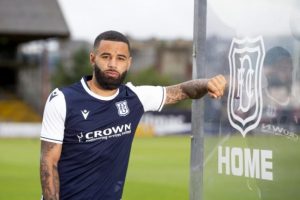 A Polish citizen born in 1922, Jakubiak Snr was one of the thousands captured by the invading German army in World War Two.

‘Ziggy’, however, had other ideas and managed to escape the Nazis, not just once but multiple times.

Eventually, he made it to Britain where he met his wife, a Scot, and two generations later Alex Jakubiak has arrived at Dens Park aiming to help Dundee break free from the Championship this season.

Signed after leaving Watford, Jakubiak has experience of Scottish football having spent two of his nine loan moves from Vicarage Road at St Mirren last season and Falkirk in 2018.

He also featured twice for Scotland U/19s, thanks to his grandmother.

“So I am technically eligible to play for either.

“My dad is from Jamaica so I have that as well.

“My grandfather got captured in World War Two by the Germans when they invaded.

“He wasn’t in the army but they were just taking anyone they could.

“He was captured two or three times but managed to escape.

“I’m not sure of the full story but he eventually got here and met my gran who was in London at the time.

“I met my grandfather a load of times when I was younger.

“He was really creative and was a proper handyman. He was full-on DIY building things. There was a room in their house where he had loads of things he’d built hanging up on the wall. He was just so creative.

“He is a big inspiration to me. I even have a tattoo of him on my arm that was taken from a picture.

“I am really proud of him and my roots.”

Talking of roots, 24-year-old Jakubiak is keen to put down some of his own by signing a two-year deal at Dens Park.

And he’s determined his time at Dundee will be a long and fruitful one.

He added: “Yes, I think I need to (put down roots). I have had nine loan spells and they have all been different in many ways on and off the pitch.

“So now at Dundee, I have somewhere I can just get my head down and, hopefully, play as many games as I can, score loads of goals and prove a point.

“The two-year deal was an incentive, too, especially during these difficult times.

“There is a lot of job uncertainty not just in football but the world at large so the deal helped as well.”

Getting out of his bed in the early hours and travelling the length of Britain to sign a contract with the Dark Blues, it’s fair to say Jakubiak was keen to get the deal done.

He was also encouraged by how much Dundee boss James McPake wanted to bring him in.

“I don’t know why it had to be so rushed, I wasn’t going anywhere else!” he joked.

“That shows how keen they were to get me. I travelled up the morning after the call, getting up at half five to catch the train at seven so that also shows how keen I was as well to be up here.

“I didn’t know too much about the club, to be fair. I had been in Scotland previously but I had never played at Dens.

“But I had been at Falkirk with Andrew Nelson and we had a good relationship.

“So when I got the call about coming to Dundee, I spoke to him about it and he had nothing but positive things to say about the club.

“So that helped me in making my decision.”

Jakubiak’s arrival came on a busy day of transfer news at the club, just as it was announced last season’s top scorer Kane Hemmings had departed.

The new man was revealed minutes after that bombshell.

However, Jakubiak doesn’t see himself as a straight replacement for Hemmings.

“I think I am a very different type of player to him,” he said.

“But at the end of the day, as a striker, you are judged on goals.

“So for me, my playing style is different but I just want to score goals which would help me and the club going forward.”

Asked whether there is any pressure in filling Hemmings’ shoes, he replied: “I wouldn’t say there is pressure. Some people might look at it that way but for me, that side of it doesn’t really bother me.

“I am just looking at what I can do for me and the club.

“You set your own targets and goals.”